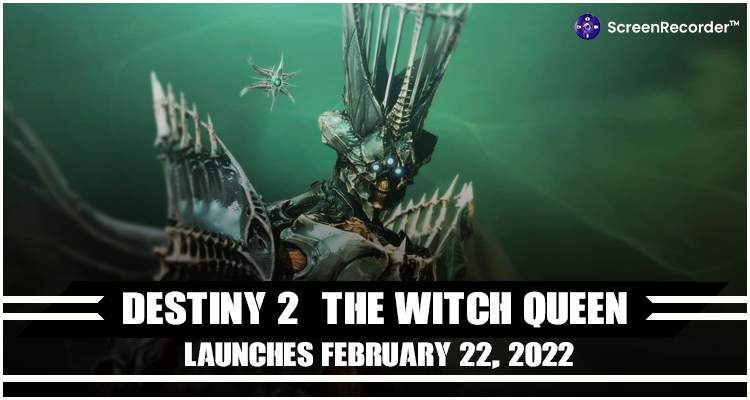 Destiny 2, titled Destiny 2: The Witch Queen, is set for a launch this next year on February 22nd, 2022. Bungie studio that has developed the game recently announced this information.

Destiny is a first-person shooting game. The game is an online multiplayer game, which means you and your friends can play together as a team. It was developed by the Bungie game developing studio, and Destiny 1 was published in the market by Activision.

Bungie has revealed not just the release date for Destiny 2: The Witch Queen, but also an anniversary pack for the game on the occasion of Bungie’s 30th anniversary. This 30th Anniversary Pack for Destiny 2 will be loaded with a lot of good stuff for the gamers. There will be a new and unique to the pack dungeon that is sure to be amazing. There will be some new weapons, amazing armor pieces, and the Gjallarhorn Rocket Launcher along with a lot more waiting to be discovered within the package.

The game is now available for pre-order and it comes with some exciting offers for those who are going to pre-order it. The first thing that you get is the Throne World Exotic Ghost Shell. Then there is an Enigma Exotic Emote that is something that gamers will find intriguing. This much is available, along with a new and unique emblem, in the standard pre-order package.

Then there is the Deluxe Edition of Destiny 2: The Witch Queen. The Deluxe comes with even better and thrilling things such as 5 unique dungeons, a new Sub-Machine Gun, some exotic ornaments, and a Sparrow, to mention a few.

What We Know About Destiny 2: The Witch Queen

The latest upcoming expansion to the Destiny series is the seventh number of expansions that this series has experienced. The game will continue from where the previous part ends. The Guardians that you are a part of will have to face Savathûn. Savathûn has gained The Light’s power and is now very strong, and is reviving her Hive using that power and giving them new strength.

Savathûn is using Traveler’s radiance to convert those revived from her Hive into Hive Guardians. These hive guardians will be strong and worthy enemies, and the Guardians will find a thrilling and tough time facing the users of light this time in their upcoming battles. The battles will happen across several new locations in the game, allowing the gamers to travel and explore a whole new set of places, all of those locations existing within the Throne World that Savathûn has full control over.

In this game also, players will be able to craft and create their weapons, modify and customize their armor and weapons, arrange their stat points as per the playing style, and so on. From shootouts to melee fights and battles in the air to battles on the ground, there will be battles of all sorts that will make you think fast, form plans, and use your focus to defeat a difficult enemy to proceed ahead.

There have been some teaser trailers that are available on various streaming platforms. They can give some insight into what the game is about and what all to expect from Destiny 2: The Witch Queen. Do check out the trailer video on YouTube. Destiny 2: The Witch Queen’s gameplay is expected to be somewhat similar to Destiny 2’s gameplay. Destiny 2 was made free to play, although it was launched as a pay-to-play game, and therefore the upcoming game is also expected by the gaming community to follow in its footsteps.

The system requirements for PC to run this game are mid-tier when it comes to just the minimum requirements. The Windows 64-bit processor and 64-bit Windows operating system, Windows 7/8/10, is a must, be it minimum or recommended.

The minimum requirement is the least of what you should have on your computer to run this game decently. This specification will give you decent frames-per-second gameplay with low lags and a nice intended experience.

Starting with the processor, the game requires an Intel Core i3 3250 processor or the Pentium G4560 processor. Both of them are 3.5 GHz processors and the AMD FX-4350 comes close to them in performance, hence that can also work along with any other processor that can compete with these.

The game will need 6GB of RAM to run decently, and a Graphics Card that is equivalent to NVIDIA GeForce GTX 660 with a 2GB memory or GTX 1050 with 2GB memory. AMD’s Radeon HD 7850 comes close to them in performance.

The game also needs a strong internet connection as it is an online video game, and 105 GB of free memory storage on the Hard Disk.

The Recommended System requirements for the game is the one that the developers suggest for the best gaming experience. This specification will allow you to have the intended experience, best frames-per-second with almost no lags, and graphic details that will blow your mind away.

Coming down to the RAM requirement, 8GB of RAM is needed. As for the Graphic Requirement, it should be either NVIDIA GeForce GTX 970 with 4GB memory or AMD R9 390 with 8GB of memory or equivalent. The hard disk storage requirement is the same, 105 GB, as it was for the minimum specification requirement.

If you hit this mark, then get ready to have an experience of a lifetime, and make sure to save those amazing battles and moments using a screen recorder.

Screen Recording is the process of storing whatever is happening on a device’s screen in the form of a video file. Screen Recording has a lot of applications, from recording online videos and tutorials, to recording video calls and text chats. Screen Recording records not just the video but also the audio and can be accessed easily anytime later.

Since streaming is a trending thing for the past few years, and the community is becoming larger and larger, thousands of streamers record and stream their games on platforms such as YouTube and Twitch. If you are also a gamer, then you should think about streaming your amazing moments online as well.

You can screen record a battle, a cool kill that you did, or an epic journey that you went on. Edit and add a soundtrack fitting the journey or the battle and then upload them on the preferred streaming platform or share it with your friends and family however you wish.

The IOS screen recorder can be used to record a YouTube video, maybe a tutorial, that you came across. It can be used to save those Facetime moments with friends and family members. Maybe you want to save a WhatsApp conversation but do not want to take so many screenshots. In that case, the screen recorder can record the entire conversation. The applications to the feature are limited only by necessity and creativity.