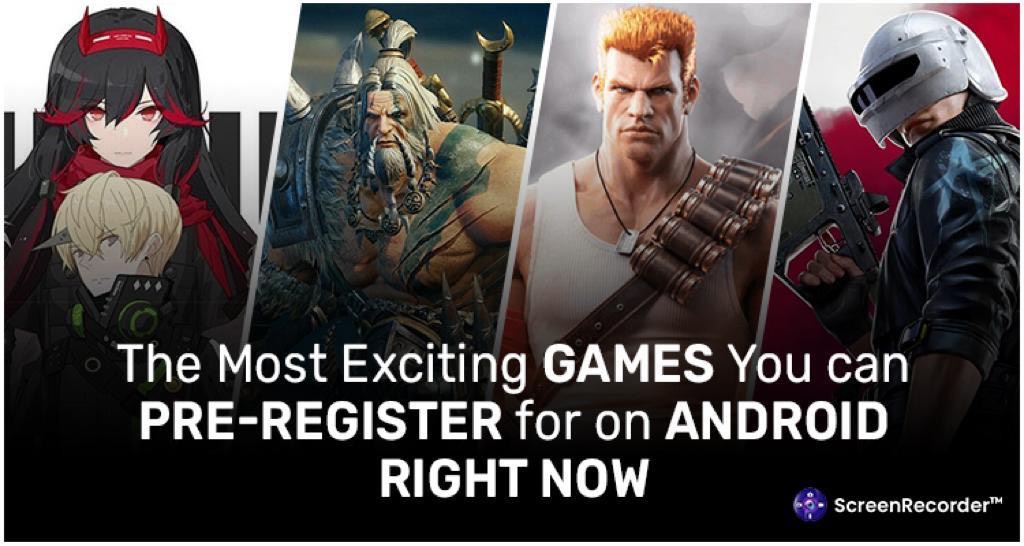 Dozens of new games release every month or so on Android for everyone to enjoy. Easy to download from Google Play or any other app that you might prefer, many of these games announce a pre-registration before officially releasing the game on any server. The pre-registration allows the gamers to be prepared for the game and install it as soon as it is released. The gamers will not have to wait to come across the game naturally or not find it for any reason on time. Besides, pre-registration also allows the developers to have an estimate of how many people are interested in their game. This helps them be prepared for the crowd technically well in advance.

Anyway, since we are here talking about android gaming let us come down to the list of the most exciting games that you can pre-register now:

For all those huge Marvel fans, there is a piece of exciting news. Marvel is releasing their own android game, and that too, not just any fighting game or RPG one, but an open-world action RPG game. Is it not amazing? The game is developed by Netmarble in collaboration with the official Marvel studios and is now up for pre-registration on Google Play.

The game is set to blow your mind away with the iconic and favorite Marvel characters, the open-world environment that allows for an amazing free play, and the RPG element that many of us love.

The game offers one the best fighting game experience on android. You can fight with the AI or real opponents in real-time while exploring through the huge open world. Make teams and plan strategies to win and proceed. The graphics are sure to be something to commend as we can see in the trailer already. So do not just wait for it to be released, pre-register the game and be informed well in advance.

Who all remember the classic console game Contra? I surely do. The original run and gun video game that was created by the famous brand Konami, Contra was a hit in its time and is still cherished by many for its nostalgic memories. The game in which you fought against aliens who had invaded, the game was one of the best fighting games that you could have at that time.

Many people have played it on their PC as a fighting game for PC using emulators and such. Well, now the game is coming to your most convenient device, the mobile phone.

Contra Returns is sort of a remake of the old game but only in concept. The game will have much better graphics, new plots and weapons, cool characters, and the classic 2D run and gun gaming vibe to make it all feel like a great experience to have. You can even play multiplayer with your friends in the coming android game and there is also a hardcore gaming mode called the “one life mode” for those who like the adrenaline rush in their games. Customizable characters, stunning guns and much more for you await in the game, so go ahead and pre-register.

Diablo Immortal is another android game under the Diablo franchise. Set somewhere between the story timeline of Diablo II and Diablo III. Diablo Immortal is an MMORPG action game where you explore the hellish sanctuary with your friends for those who have not played them. The demons and the angels keep fighting amongst themselves which is one of the classic storylines for such games, and you as a mortal human participate in the war as well. Your role-playing mission is to stop the return of the destructive, evil, lord of terrors.

Buckle up, and pace yourselves for an action-packed journey in the monster fighting game for android as you can pre-register it now on Google Play.

I am sure you must have heard of Final Fantasy, if not played and loved it, at the very least. The game was brought to the world by Square Enix, and the company is back again with a game for you all on android devices.

NieR is an RPG command-action android game developed by Square Enix and Applibot. The game provides for a visually stunning world where you command your character in the third person and explore the world and fulfill your missions to regain what you lost and go on an epic journey through The Cage.

The graphics are stunning, the gameplay is amazing and you get to have an ‘auto mode’ wherein your character selects everyone around as the enemy and attacks them without giving many commands. Makes it a game suitable for those who are not good gamers to enjoy the game just as much.

The android game is another RPG but one with visually appealing and great graphics and 2D gameplay. The game is a fast-paced stylish game with a very advanced-looking interface and gameplay, characters, and storyline. You look like an anime character if you love anime.

In the game “Mankind is almost extinct. Earth has been conquered by a robotic army—the Corrupted—twisted and warped by a biomechanical virus known as The Punishing.” The battle sequences are amazing, the plot is good and the real-time combats make you get hooked to the game soon enough as you start it.

Pubg, the famous battle royal game, is a game that almost everyone knows even if they are not into gaming. The android and IOS game got everyone hooked to it. Its big open world map, inventory, graphics and gameplay, multiplayer option and much more turned it into the sensation that it is today. Today.

PUBG: NEW STATE is a new game from the same studio, by Action and Krafton, that developed Pubg, bringing you a similar gaming experience in a new world that is in the near future. High-tech weapons, advanced vehicles and inventory, a futuristic environment, and much more makes the game one that is worth the wait. Not to forget, the classic battle royal feel that everyone loves is gonna be there just the same.

Some other amazing games that you can pre-register, for your android devices and even play them as games for PC using emulators, are:

DRAGON QUEST The Adventure of Dai

My Time at Portia