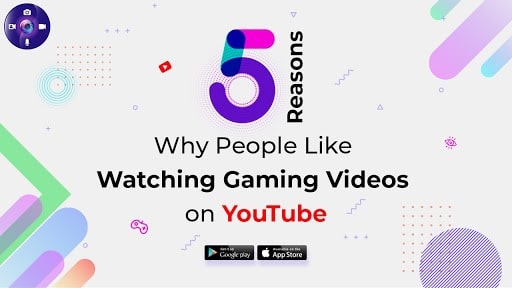 Gaming- A Passion and Also a Means to an End

The gaming world is evolving much faster than we could ever think of. With tools like screen recorder and more game streaming is no more a head-scratcher, and now gamers are making seven-figure incomes just by streaming their gaming videos on platforms like YouTube and Twitch.

Yes, you read it right!

Gamers are earning a million dollars just by playing games, so we guess individuals who said that one can never make money from gaming- WERE WRONG!!

Individuals across the world tend to watch their favourite streamers or videos either to learn games or to know more about using a Mobile screen recorder to start a streaming channel. Now that YouTube provides you with a platform to stream, watch games, and upload the recorded streams, the gamers are getting more views through various traffic methods.

Aspects like a Screen recorder with internal audio for going live pulls in the traffic who are available online right away. Also, the videos created from the streams further gains popularity through SEO techniques on the videos.

Somehow, people are not watching a video because of the marketing is sprinkled on it; they watch it for a few reasons listed below:

There are times when we would go out to buy a walkthrough guide for a particular game to upgrade our skills. Presently, with the videos being just a click away and absolutely free, gamers can effortlessly find their ways out through the levels they are stuck on – streaming is now easier with screen recorder for iPhone or android.

Several tutorials don’t just help people to get past a certain point (especially the ones they are stuck on). Game streaming helps you to enhance your gameplay in modes like PVP (player vs. player) and more. It is extremely competitive which means, the more you watch them, the more strategies you can master, and the more likely you can win your next match.

Games like Call of Duty and PubG have several competitive modes where you might have to compete against a pro. In case you don’t know the basics like what are you doing, what weapons to use, and where to stand to revive, etc. You will likely lose the match and your team members will not be happy with you.

Well, there is also a social content to watching videos YouTube. Many people share such videos with their friends and generally watch or discuss them when they together. Whereas, there are people who just like watching the game streams to stay in the loop with their friends- they want to feel socially accepted. Also, some of them want to have a career in game streaming, so they follow several channels on YouTube to learn everything about- how to stream on YouTube.

For their Passion for the Gaming Industry

Many people will prefer watching a live stream on YouTube and some like watching the pre-recorded videos that are created and edited using a screen recorder, just for the love for the games. There is no doubt to say that people spend hours upon hours learning the gameplays as they want to master and get access to new skills right then and there.

Also, a lot of YouTube videos that get traffic are the highlight reels from the industry’s top gamers having a lot of subscribers. Such videos are liked by the gaming community due to the fuzz and downtime is taken out and you are provided with the best gaming moments.

For Fun and Entertainment

According to a recent study around 73% of YouTube, gamers enjoy watching others play games on YouTube- shocking isn’t it? This is for the same reasons that people might love to watch a movie, documentary, stand-up comedy, or even reading a novel, etc.

They say that the value of entertainment is not just in the game itself, but the gamer who has created it. Many people get attracted to the charm of their favourite YouTubers. They get to know his/her personality and always look forward to their new videos.

Many gamers who share the stream on YouTube are getting more famous over time ad this trend just keeps growing day by day. Teenagers love playing games, and somehow they are getting inclined towards better or pro players ahead of them. This is one of the main reasons why people are watching game streams on YouTube more.

The number is also high among the grown-ups, they love watching the streams of their favourite games posted on YouTube every single day- this makes the Vloggers feel like celebrities by simply highlighting their skills.

People look forward to reaching YouTube for reflecting diversity and inclusion. Some of them love creating immersive gaming content to foster the gaming community and improve their own streaming skills in their videos. Also, the ones who can get hold of their audience’s attention becomes an influential perk and can earn through game streaming. Whereas, the gamers might watch the game stream to upgrade his/her skills or even to know more about using the best screen recorder for android and iOS.