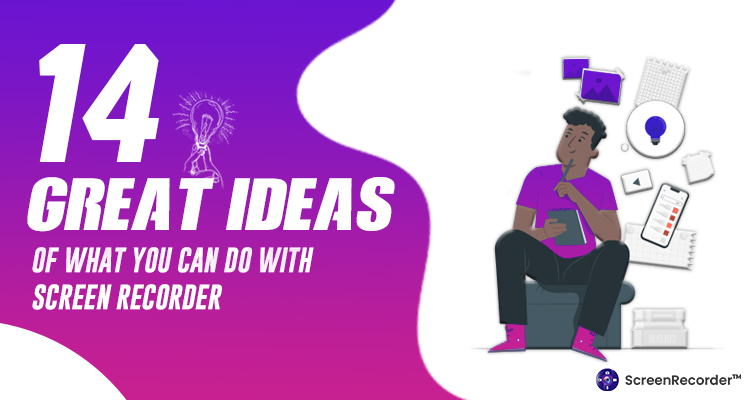 There was a time when screen recording was not an easy task. People who wanted to record their computer screens needed to buy some expensive software that was very heavy on the system or get a professional’s help. However, with time things have advanced so much that now anyone can do it by downloading several easy-to-use screen recording software. There are even smartphone applications that can be used to record the screen of your android and iOS devices.

This software is now even integrated as a feature in computers and smartphones when you buy. Almost most of us who are into gadgets and technology have tried out screen recording and it is very difficult to visualize what we would do without them now. Be it for personal or professional needs, screen recording is becoming essential now. Teachers use them to record some presentation for a lecture, youngsters use them to record their conversations on WhatsApp or Instagram, people use them to save their webcam communications or video calls with the friends and family, the streamers use it to record their gameplays and stream them online on YouTube and Twitch, and the list goes on.

However, if you think that these are pretty much all that you can do using the screen recorders, then you are in for a surprise. There is a lot more that can be done that you probably know of. All it takes is some creativity and improvisation to make use of a thing in ways that traditionally people would not have thought of. Sometimes, our needs or desires also give rise to some new ways. Therefore, here are 14 ways that you can use the screen recording feature or software.

Screen Recorder can be used in a very creative way, or a crafty one if you ask me, to create videos without much knowledge about how to create videos and edit them. If you are someone who wants to start a YouTube channel, teach people something you know and do not know how to record yourself, and put the video into a computer and such, then Screen Recorder is your friend.

Now whatever you do in front of the webcam will be displayed on your computer screen and will be directly recorded as a part of the screen recording. The screen recording software will also record the audio along with the video, so you do not have to worry about adding the audio separately and syncing it later on. You can also draw some sketches, go through a slide you prepared, and much more during that time to make your tutorial as expressive and comprehensible as possible.

Who said that Screen Recorders are only to record screens? They can be used to also record audio, and that too is a much higher quality than you would expect. Forget about Audacity, you only need your screen recorder and a microphone.

Just start the screen recording software, you can have a static or a black screen on the computer, and record the rest. Then use any simple audio editing software to trim and tweak here and there, or you can post it unedited if you feel like it

Suppose you had an argument with someone over text, and it was very long. Now you want to show it to your friend and she asks you to send a screenshot of it. You tell her that the conversation was too long so it would be better if she could talk on call, but she says she has some guests over so she cannot, so you will have to send her screenshots only. In that case, having to take several screenshots and then making sure their chronological order is not wrong and then sending is a hassle and that is not at all debatable.

A similar thing can be done in terms of emails, digital notes, pages from a digital book, and so on.

Sometimes you made a payment but it got unsuccessful midway, or you launched an application and it crashed again and again. You wish to tell the institution responsible for dealing with them, but do not know how to explain it to them.

Well, you can screen record the application crashing live, or the entire payment process failing if it failed multiple times and is bound to happen again. You can record any technical glitch that you are facing and send it to the developer or institution’s email as concrete proof. You can even show what you do before the issue happens so that they can understand it better. It makes things easier for both the person facing the issues as well as the person about to help.

Be it the trade graphs or any other that is dynamic, especially considering the rise and downfall in the cryptocurrency’s graph recently, you can record them from your screen. It comes in handy to those who wish to study them and save them for easier access later on. Traders and especially analysts can do a lot with such visual data and combine it with their statistics to have some clearer insight.

Otherwise, you can slide through several static graphs on your screen for your office project or presentation, and then present them to the bosses.

Gamers often like to live stream their games and have their reactions added to the side of the screen as well for a better audience engagement. Bloggers also go for live streaming. For them, screen recording is a very resourceful tool to save their live streams and view them later.

They can edit the live streams that have been recorded and post them on their social media accounts for a wider public reach.

Instead of taking screenshots of chats, you can directly record them as a video. Screen Recording can be used to record a live chat and then store it.

It is one of the obvious and pretty basic uses, but many people still forget to do it. Screen Recording is best to record your gameplays and show those cool stunts that you did in that game to friends and family members.

There are times when you get across a video on YouTube or any other platform that you wanted to download but did not want to go to a third-party website and then use it to download it. Using a screen recorder, the videos can be downloaded directly as they are playing, so you can watch them while it gets recorded.

Screen Recorders come with an audio recording feature as well. This means that you can even record a call with a friend or your partner, or any other person. You can even record those video calls and save them as a memoir.

Recording a Digital Sketch That You Made

Graphic Designers and Sketch artists who use iPads and other digital devices will love this. You can record the live creation of your art and then edit it, maybe create a time-lapse sort of a thing, and share it on your social media. A new and fun way to exhibit your art.

It can get a little difficult to explain how to change the settings on the phone or to use a screen recording feature for the older generation. They find it harder to operate these smartphones. Therefore, using a screen recorder, a video can be made guiding them just where to click and what to do.

Maybe you want to welcome the freshers in your company, or maybe you wish to greet someone for any particular reason. Whatever the case might be, Screen Recorders can come in handy. Open up your front camera and start the screen recorder app, and speak your greeting. Then you can switch to the slides that you may have prepared or other people’s videos that you received.

Since these apps allow for pausing the recording, the recording can be paused while switching between videos, and then can be resumed to make an almost seamless video.

Last but not the least, Screen Recorders, in general, can be used to create 2D videos. From a basic 2D animation video to a meme video, a lot can be done depending upon the creativity of the person.

To better elaborate, a basic animation video can be done by pausing the recorder before switching frames each time, using any sketching app such as Adobe Draw.