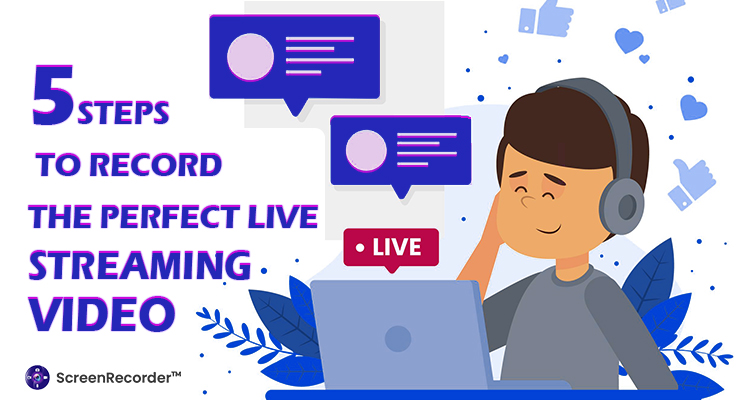 How are we expected to process it all in real time, especially since it might vanish the moment we scroll, leaving us with no option to recover it?

What's more, how can you record streaming video so it doesn't get lost in the emptiness of the internet?

You may simply capture or record live streaming video to share with colleagues or co-workers, or store it to watch later. It's simple, quick, and will bring order to an otherwise chaotic media world.

Simply put, when you capture live streaming a video of what's happening on your device's screen, you're doing a screen recording and the application used for the same is screen recorder.

So now let's get started,

Follow the instructions below for an introduction to Android screen recording using the 'Screen Recorder app by Appsmartz' application.

Download and install the Screen Recorder app from the Google Play Store on your Android 5.0 or higher smartphone if you've not done so already.

Step 2: Open and give permissions

On your screen, a little red icon will emerge, surrounded by five smaller white ones. Tap the white symbol with the red camera and then "Start now" to start recording both video and audio.

Swipe down from the top edge of the screen to open the notifications menu once you're ready to stop recording. You may pause or end the recording from here, or write on the video by tapping the pencil symbol.

When your recording is finished, it will be instantly saved to your Android's Gallery. On the completed video, press the magic wand symbol (the farthest to the right) if you wish to customize it.

Screen Recorder by Appsmartz not only allows you to record the ongoings of your phone but also offers you a number of other features that are not found in other screen recorders. Some of these features include:

Here's how to record your iPhone's screen.

Then tap "Control Center" in the Settings app. Select "Customize Controls" from the drop-down menu. Look for the phrase "Screen Recording." Tap the green plus symbol next to it if it isn't already in the "Include" section. It should now appear in the "Include" column.

Slide down from the top-right corner of the screen to access the Control Center, or swipe up from the bottom of the screen if you have an iPhone with a home button.

Press and hold the "Record" button.

Step 3: Know when device is recording

The Record button will become red after a three-second countdown and will record whatever you do, even if you leave the Control Center. Because the time in the top left corner is red, you'll know you're actively recording.

Press the red time indicator at the upper left of the screen, then tap "Stop" to stop recording. Alternatively, you may open the Control Center and press the record button once again.

In the Camera Roll, your new recording will appear. To find it, launch the Photos app and look for the most recent item. You may share or modify it just like any other photo or video from here.

To begin, look for a good screen recorder and screen capture application.

You may record your desktop screen using a variety of tools. We use TechSmith Snagit to produce screen recordings quickly and easily. You can even remove the elements that you don't require.

Open Snagit after you've downloaded it and familiarise yourself with the various settings.Make sure you're able to record video rather than take a photo simply reviewing your settings.

The screen recorder toolbar appears below the selected region when you pick the area of the screen you wish to record. With the video recording, you can either choose to record microphone audio or system audio.

Select your full screen, a specific window, or a custom region by clicking the Capture button.

You can just record the streaming video portion rather than the full browser window.

After you've made your choice, press the record button to begin recording.

You may pause and restart recording at any moment, toggle between webcam and screen recording using the webcam key, and even adjust audio settings while recording.When you're through recording, use the stop button to end the session.

Step 5: Save and upload your work

After you have your video, you can store it as an MP4 on your computer or share it as desired. Both Snagit and Camtasia offer built-in export capabilities to major sites including YouTube, Discord, Screencast.com, and many others.

Video recording might help you make sense of the insanity you're experiencing, especially if you're working from home. Recording a Zoom conference is one of my favourite uses, but video capture may be used for a variety of other things as well.

Confirm that you have the necessary permissions to record and distribute material. For instance, if you pay to attend a webinar but then record and share it with your co-workers, you and your organization may be in trouble.