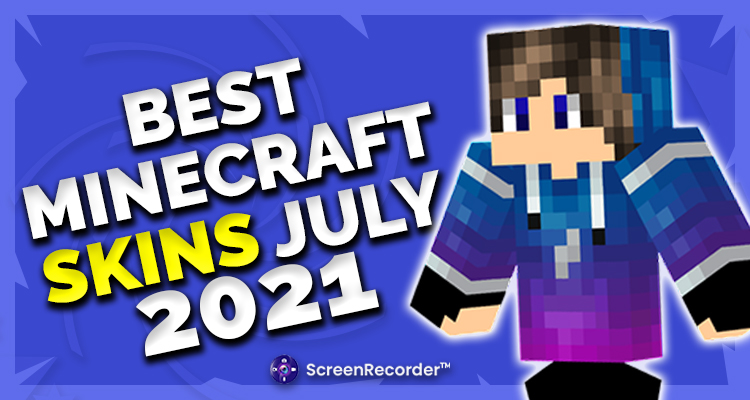 The usual Steve skin and Alex skin in Minecraft are nice for sure, but to be playing in the same skin for so long gets pretty monotonous. Changing the skins is that is why always a way to get a new look for your character and make them resemble your fantasy. Just like a fresh fade, the skins work the same for the characters.

You may not be bored per se of the usual Minecraft skins, but then again you might want to have a skin that resonates with your castle that you made or a farm that you built. A knight-looking character would suit perfectly well to the castle, and an adventurer-looking character like Lara Croft or Dragon Ball’s Goku might do well with a farm. Anyway, the suggestions might seem off-beat for some, but you get the gist. Have a team? Get matching skins for the team to have similar costumes while going on a player versus player battle.

There are so many diverse skins to choose from and experiment with. There is the classic Solid Snake-themed skin, Lara Croft-themed skin, and Master Chief skin just to name a few. Here is a list below mentioning a number of top Minecraft skins that will up your game and make for really stylish characters that set you a class apart from the others in the game.

Love Pokémon? Well, who does not?  The show made our childhood perfect, gave us a fantasy to imagine when we were young and now the games that came out allowed us to have a glimpse of the life that a Pokémon trainer lives. That said I bet Ash is a favorite character of most Pokémon lovers, because after all who would not want to have Pikachu as their best friend.

One of the classic characters in Minecraft, The Master Chief skin is one of the classiest looking skins that you can have before going to a battle or just casually playing around. The design of the character makes you feel that the Chief naturally belongs in the game. Going on adventures, exploring jungles and raiding places feels best with a character that looks like a warrior,

If you have played the Dead Space series on your PC or console, you know and even like Isaac Clarke’s character. The game was a hit for its thrilling gameplay, innovative and deadly weapons, and even deadlier monsters that you fight in the dead of the space.

Well, you can have the skin based on that character from the game, and get the feel of the survival thriller in Minecraft.

For all those Star Wars fans, the good news is that you can create a character that has the Stormtrooper skin. There are other skins such as Darth Vader and others as well to pick from. You and your friends can have a Stormtrooper team and go on PvP battles.

This Viking Skin is the only one that is closest to the Minecraft Valheim Skin in resemblance.

The game that made you find your friends as ‘sus’, Among Us, became a fan favorite in no time and people loved the game from all over the world. This skin is for you to get the feel of one of the characters from the game and bring out the survival imposter searching vibe in Minecraft as well.

Geralt of Rivia, better known as The Witcher is a famous character from the popular game series Witcher. We recently saw Henry Cavill slaying the role in the Netflix adaptation of the game. Well now is your time to get the character for yourself in your Minecraft game using this skin. The Minecraft Witcher look will go well with many landscapes, adventures, and battles in the game.

For all the female players as well as the fans of the famous Lara Croft franchise, this skin is just the one for you to try out.  Although there might not arrive the possibility of you going into such adventures as climbing the mountains, crossing a stormy exploring a hidden temple with deadly traps, you can still do a lot with this skin.

Explore the underground in Minecraft, go for battles, explore the vast landscape and get that archaeological vibe in the game.

The brave, the gorgeous, the stunning, Wonder Woman is a superhero name that most of us know of independent of the fact that you are a DC fan or not. She is a representation of women’s power and is loved and idealized by many girls all over the world. Gal Gadot’s famous representation of Wonder Woman or be it Lynda Carter’s, you can go for anyone in the game.

We all see those boys' club’s favorite monsters in movies and shows. Therefore, this Minecraft Zombie Girl skin is for the girls to have their time. After all, why should boys have all the fun and monsters? You can select from hundreds of different zombie girl skins or customize your own too. Ripped jeans, Floral T-shirt, and whatever else that you want to add, just go ahead.

Kakkarot or better known as Goku is the globally famous anime character from the DBZ series. He is the symbol of strength, family, hard work, perseverance, and kame-hame-ha. Now you can bring your favorite Saiyan character to Minecraft using Goku skins. While you cannot fly this character unless, in the Creative Mode, the character still looks great in general usage.

Another famous anime character, for all those who liked the “One Punch Man” anime, must be liking Saitama as well. The parody character that defeats any and all enemies in just one punch, the bald plain-looking character that can go from 0 looking to serious and killer looking in just a moment. Saitama is a fan favorite and now you can bring the character to your Minecraft game using the Saitama Skin.

This skin is one of the popular ones, wherein you look like a classic old man with strap-on pants, a white shirt, and a white mustache and eyebrows. No hair on the head of course. You can select from other old man skins as well.

The funny, the charming, the brave, well that is how we see Shrek as right? Everyone’s favorite ogre that is the king of parodies in his own right, Shrek is a character that you would like to have for sure. That is why the Shrek skin in Minecraft is the best. You can have that green face and those old-looking clothes and the Shrek vibe will be complete.

Everyone’s favorite, the friendly neighborhood superhero “Spider-Man” is just the one every person from any age would love to have in their Minecraft world. The red and blue dress and those big white eyes and a small Spidey logo on the back cannot go wrong at all. You cannot have those web-slingers in the game but that should not stop you from going ahead with the skin and enjoy.

Whenever someone takes the name of Iron Man, we all remember our beloved Tony Stark in that metal armor with Jarvis inside the helmet and the glowing light in the chest. Iron Man is a world-famous superhero by Marvel and after Avengers Endgame, is one of the best heroes that the generation who grew up watching, will always cherish in their memories.

Well, so how could have finished the list without mentioning such a great hero-themed skin for your game. Iron Man skins are available in many designs based on which suit you are looking for, all of them sharing that classic red and golden color combination with the helmet. Just like in other skins, you can either get one from the marketplace or design one for yourself.