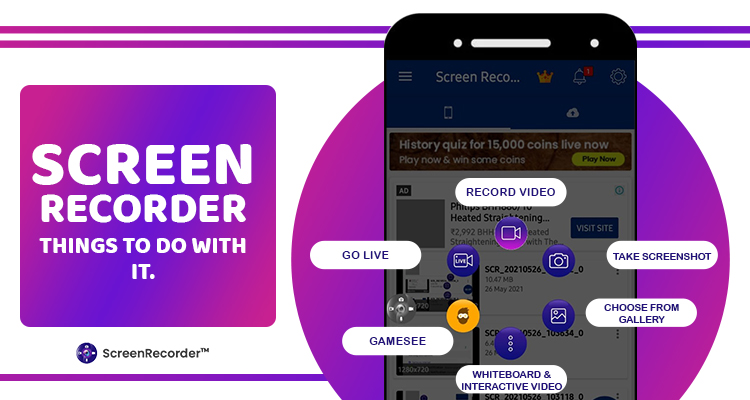 SCREEN RECORDER - Things To Do With It

Once upon a time, screen recording was a challenging task. People who wanted to record their computer screens either had to spend a lot of money on highly costly software or hire a professional. However, things have improved over time that anyone can now perform it by downloading one of several simple screen recording applications. There are also smartphone applications that can be used to record your android screen and iOS screen.

Since streaming has been a trending thing for the past few years, and the community is becoming larger and larger, thousands of streamers record and stream their games on platforms such as YouTube and Twitch. If you're a gamer, you might consider streaming your incredible moments online as well. You can also use a screen recorder app to record the games on android phones. There are also screen recorder apps for iOS available on the app store, which can be used similarly.

What is live streaming?

Like live TV, live streaming technology allows you to watch, create, and share videos in real-time. To live stream, all you need is an internet-enabled device, a platform to live stream from (such as a website or app). Facebook Live, Instagram Live stories, Twitch TV (often used by the gaming community), House Party, and Tik Tok are some of the most popular live-streaming apps available today.

Some live streams have the option of being private. Video conferencing apps, such as Skype or Zoom, use live streaming technology to allow you to communicate with people you've invited. Thousands of users can watch public live streams at the same time.

Viewers can upload remarks that show alongside the live feed for viewers to comment on and interact in real-time. They can also send each other emojis like hearts and gifts like cash displayed on the screen.

How to live stream?

Here is a simple guide to live streaming that will surely solve your doubts about how to Livestream? These are the steps you need to follow to set up a live stream.

The live streaming equipment which you will require for the job are:

The video signal is "translated" for the Internet through an encoder. An encoder is an application that compresses and converts an audio-video stream into a digital, web-friendly format. Because most video sources aren't designed for live streaming, you'll need an encoder because video cameras are designed to record large, bulky video files, not to stream in real-time.

The website, platform, or app where your live video is made available to others is known as a streaming destination. Content delivery networks, or CDNs, are the most common names for these destinations. Youtube, Facebook Live, Twitch, and other popular free CDNs. Along with these, you should also have a good internet connection with high upload and download speed.

What is a Multistream?

Multi-streaming could refer to the ability to broadcast live video to Facebook, YouTube, Twitch, Twitter, and your private watching page simultaneously. When you have a live event and want to reach a large audience, this multistream is a great way to do the same. A multistream player can be used to perform multistreaming.

How to do live streaming on an android device?

You can now share with the world your experience while playing the game with a live screen recorder which allows you to stream live while enjoying your gameplay. You can use "Screen Recorder by Appsmartz" for the mentioned task. Screen Recorder by Appsmartz not only allows you to record the ongoings of your phone but also offers you several other features that are not found in other screen recorders.

Some of these features include:

Live streaming: with the screen recorder app, you can live stream games, live shows, and more to YouTube, Facebook, and Twitch.

Storage on a cloud:  users can create narrative presentations and publish them to a video streaming cloud using this app. The app itself doesn't upload any recordings to any cloud network or server; therefore, the Screen Recorder doesn't consume any data or Internet. All of the videos are captured and saved on the phone's/SD card's memory.

Video settings: this application not only records video but also provides various other functionalities by which you can decide the quality of video. You can adjust the Quality of resolution; you can set frame rate, bit rate and even choose the orientation of the video.

Audio Recording: It's your choice whether you want to record audio with a camera or without a front camera. If you just want audio then you can use this app as an audio recorder by turning off the front camera recording.

Internal Audio: using this app, you can even record the internal audio of your device along with the screen. This feature is beneficial when you want to record a webinar or a live tutorial. This feature is available for android version 10 and above.

Record Screen: In live application usage mode, you may record any app on your mobile device, such as typing any message, recording video calls, viewing any video, listening to any audio, or recording anything on the mobile screen and capturing screenshots. You can also use a front camera while recording your screen and create an interactive video.

Watermark: you have an option to enable and disable watermark in your videos. You can also add your custom watermark using the screen recorder app.

Graphic overlay and pause overlay: Screen recorder by Appsmartz provides you with an option to select the graphic overlay of your choice and enable it in the stream. You can also modify the orientation and duration of the overlay. The pause overlay option is also provided in case you need to pause the Livestream.

White Board tutorial: With the in-built video editor and recorder, you may draw text on the screen while recording and trimming videos. You can create your tutorials for different applications and games using this feature.