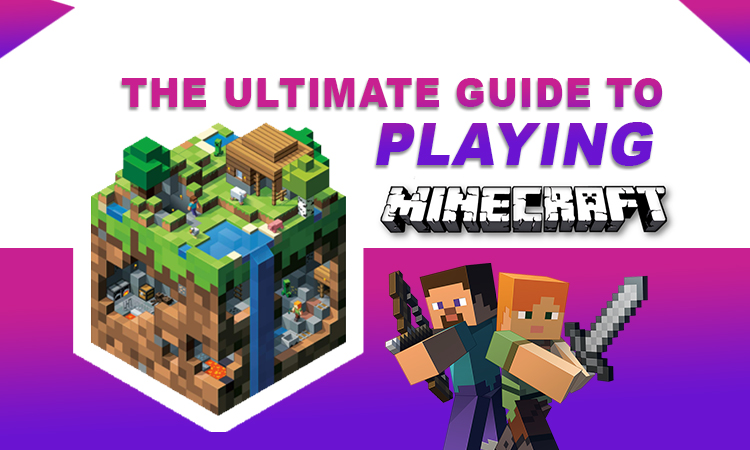 The Ultimate Guide to Playing Minecraft

Minecraft belongs to the genre of gameplay that lets the players perform the tasks in a confined area to achieve a certain goal, broadly defined as sandbox game. It is basically an open concept that does not keep the player constricted in his mind rather stimulates the player to play free of mind and progress in whichever direction the player wishes to. There are various other games, for example, The Sims, Grand Theft Auto III, SimCity, Second Life etcetera. Minecraft is labelled as one of the best examples of the sandbox genre as the players can go to any level of creativity and do the tasks being goal centric. Talking about a wider aspect, Minecraft prospers an aura of creating your own world, wherein the players can combat, explore and fight for survival by making their own way of freedom in the confined area of gameplay.

Certainly, this intriguing game of Minecraft was developed by Mojang and is fathomed as the best selling book with immense active users of around 126 million in 2020. All you need to do is create, recreate, build, mine, fight, survive and play freely without following a directional approach. Usually, the game is played from a first person perspective but there is also an incorporation of third person perspective mode. The plot of the game centres around placing the blocks anywhere in the given confined zone and creating the arrangement in your own way. It is a 3D game with a virtual setup that promotes a free play. A smooth game with elementary craftsmanship, and extraordinary mechanics giving a resemblance to the game of lego block building. Initially the game started with a very basic concept however, with the rapidity of time, the content of the game had no bound and the thirst of the players to play the game was unstoppable. Till today, the game is surprising the players with newness.

The game did not incorporate difficult mechanics to strangle the intellectual players rather it kept the interest of the players intact. The actual problem was faced by the people who skipped the updates as the newcomers or the beginners faced the challenge of navigation to progress in the game wherein crafting recipes became a task for many. The problems that occured while playing the game were very common as sometimes the minecraft recipes are not portrayed in every version of the game. However, the beginners are eventually unaware of these recipes and are acquainted with the guide that provides tips and tricks of winning the game. The guide acts as a mentor for the newcomer of the game and teaches tactics to commence the journey in minecraft on the first day for the player to survive till the first night. The player can easily die in the game, fortunately if you are not in the Hardcore zone, then the game continues.

Usually in this game the wanderer revolves in a world where he has to collect resources and use the items and should have the knack to control the situation. The beginners should start practicing in peaceful mode. Basically, it is a block building game which is usually cubicle in shape, wherein the blocks represent the objects in the game. The character in the game usually stands by keeping a space of a single block and to be safer even two tall blocks apart. One day of the game is equal to 20 real time minutes of the day. The gameplay during the night time is much more challenging than the day time therefore, the beginners guide propels ways for the players to find their own feet and be under the shelter during the night.

The concept of seeds is the driving force to manage the layout of the land in your world as the different environments in the game and let the players have a varied experience. The idea of Minecraft seeds lets the players explore eloquent mansions, come out of a shipwreck and various other explorations. Another intriguing creation in the game play is the Minecraft mods, that help you twist the gameplay and imbibe with the mechanics in a better way. Experience of entering the world of space, initiation of fresh biomes, and new wild animals are all the aspects of Minecraft mods. If you want to give a good look to your game or make it seem interesting, then the players must install the best Minecraft shaders. These shaders incorporate additional light rays, deep color of water, improvised shadows and impeccable visual presentation that gives an enthralling view to the eyes.

Also, you must know, Alex and Steve are two default skins in the game, however, the players can easily infuse these two skins with the new characters in the game. The character can exhibit creation like, Thanos, Jedi warrior Homer Simpson etcetera with the Minecraft skins. Moving on, another need-to-know factor is the Minecraft texture packs, that helps you to change the look of your blocks and objects. This concept helps to present three dimensional trees, rippling water and flowing grass to give a different outlook. In order to rise substantially in the game, Minecraft enchanting can help you to attain improvised weapons and items. The beginners guide helps the players to pave the path of building an enchanting table and achieve the topmost level of enchantment for better gameplay. Last but not the least, setting a perfect Minecraft house is an essential part of the game, as the construction of a great Minecraft house can help you sway away from all the difficult challenges and make you a refugee by storing the whole of the hard earned treasure. The player can certainly flaunt his own creation and impress the viewers with the giant Minecraft house.

Withstanding the information mentioned above, there is more content that shall be highlighted. The game is easily available on every platform and you can play Minecraft for free. Every player wants to take control during the game, Minecraft certainly allows that very easily, knowing the fact that you're aware of the tactics. A set of Minecraft characters and cheats should be known. There are certain codes that let you set the time and weather , choose your own way, reproduce items and the objects and allow you to play safe. In case the players want to be adventurous while playing the blocks, the game provides the insights on various Minecraft servers and acquaints you with creations like Games of thrones, Grand Theft Auto, Pokemon etcetera. Mincecraft also exhibits a private gameplay setup wherein the players can manage their own multiplayer mode, comprising seven to ten characters and help the players to be familiar with Minecraft realms.