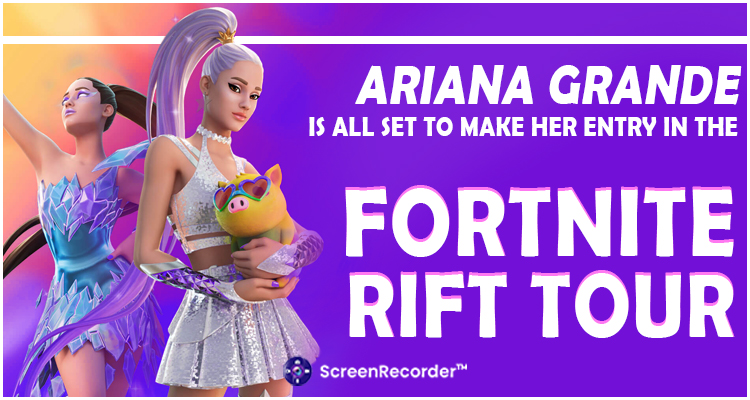 Fortnite has been under quite the spotlight for its events that are held virtually within the game. One such event had invited Travis Scott and it was a huge success. The event had Travis Scott’s avatar come down literally into the game in the form of a comet that was purple-hued. Then happens a big blast with all the players being blown away, and then the surprise is revealed as Travis Scott himself. The rest was a musical event that was something to remember.

This year Fortine’s event called Rift has another such thing happening. The star who will crash the party and make the musical fest a time to remember is none other than Ariana Grande.

The battle royale game has been a fan favorite for years now. With a plethora of maps, weapons, abilities, skins, and characters, the game is satisfactory to care about. Team up with your friends or play alone, that choice is left up to you. The result will always be a great time.

Fortnite has had multiple guests such as Marshmallow and Travis Scott come virtually and perform in the game in the past. Epic games have almost set a benchmark that others will have to compete against to make any impact. The whole concert, although virtual, is simulated in such a way that it gives the vibe of a real concert and looks just the same, with the crowd, the lights, the music, the cheering and fireworks, and much more.

Fortnite has recently revealed a trailer for its upcoming event called Fortnite Rift Tour. The whole event will last for around two days, during which several festivities will happen. Ariana Grande is the star of the event, who will be performing during the concerts. The concerts will happen separately in a custom game mode that will be launched for the gamers to go in known as Party Royale Mode. This mode will be temporarily available and will most likely disappear after the event is over.

Fortnite has also released an Ariana Grande skin for the players to buy. It is available in the item shops for everyone to buy now. The event also has a mysterious vibe as it has a few things that are still a secret. The event has been, by the developers, said to promise some mystical new things as well as several achievements and rewards for players to earn.

The game event will begin approximately at the aforesaid time, and there will be countdown timers and such for the commencement so you can refer to them as well when you log in to the game. Fortnite has recommended the players enter the Party Royale Mode earlier than the start time of the event, as early as half an hour before the show begins. Each concert or event will last for around half an hour as per the information available.

The developers have said the Rift Tour will be a "musical journey into magical new realities where Fortnite and a record-breaking superstar collide". Ariana Grande has also said that "Working with Epic and the Fortnite team to bring my music to life inside the game has been so fun and such an honor,". She seems excited to be in the event, and we are excited to see her inside the game. With the whole pandemic situation and such, it has not been possible for most of the world to experience events as we did in the past, so for us, this event is a blessing in disguise and a relief we all needed. Ariana had further said, "I can’t wait to join my fans and see all of your reactions to such an unforgettable, magical journey to new realities.", and this only makes us happier as fans.

Ariana Grande’s concert will happen on Sunday or the final day, with three major concert shows where the players can get a glimpse of our beloved star. Even before the tour begins, the players are allowed to earn some rewards. Do not forget to sign up for the event to get a reminder. The reminder will be available for one event out of the five major shows.

The Ariana Grande skin looks just unreal and really pretty. Obviously, the real popstar can never be compared to any virtual lookalike, but still, it is hard to rule out the fact that the skin looks really cute.

The default skin has a white stunning dress, high heels, and white stockings and glossy hair that give s very light violet hue. The facial features and the hairstyle give undoubtedly an ‘Ariana Grande’ vibe. There is another skin mode available which looks rather mystical. It has glowy eyes that are white with a little violet hue, almost like a godly being. The dress is a one-piece blue and violet-colored tacky dress that looks like something from the future. The heels look like they are made up of crystals of the same color as the dress, and so do the bands on her hands. The second skin looks more powerful and out of this world to be precise.

The skin is available for 2000 V-Bucks in the game. That is just for the skin. As for the full package which includes the “Piggy Smalls Back Bling”, a “7 Rings Smasher Pickaxe”, a “Sweetener Sailshard” and a “Floaticorn”, the price for the whole package is 2800 V-Bucks.

Fortnite has been one of the most favorite games that are streamed. There are thousands of videos of Fortnite streams on YouTube and Twitch, and reaction videos of the gamers and the viewers of those streams. People have spent a lot of time making them and made even a career out of it.

To stream a game online, you can screen record it and edit it in a video editor, add some voice-over or a soundtrack, captions, crop the unnecessary parts, and just upload it on any streaming platform such as YouTube or Twitch or even Facebook. Fortnite mobile is also screen recorded and streamed a lot, and so why not try and begin your streaming journey today as well?

Even if one does not intend to become a streamer, she or he can still screen record the game for themselves. Sometimes you find yourself doing a stunt that is just awesome, or maybe you found yourself in a 1vs 4 fight and defeated everyone in style. In such scenarios, you would surely like to record the gameplay and show it off to your friends and family. That is when having a screen recorder can be helpful.

After talking about Fortnite for so long, let us change the atmosphere by coming down to Final Fantasy Brave. The franchise has a name of its own in the gaming history and needs no introduction, which is why I will straight away jump to some tips to help you play the game while enjoying the most out of it.