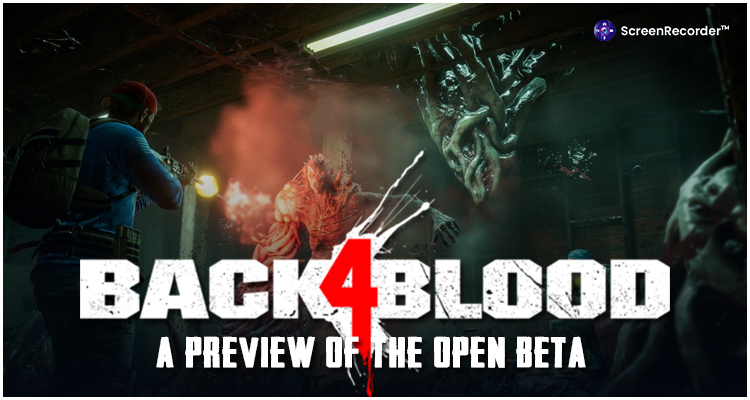 Back 4 Blood: A Preview Of The Open Beta

The zombie first-person shooter game from the developers of the successful Left for Dead games, Back 4 Blood is about to set its step in the market as a hit. Multiplayer, of up to four players, co-op game where your ultimate aim is to survive the hordes of zombies, by shooting the life out of the dead. Turtle Rock Studios has not let the fan down with the previous Left for Dead game. The thrill, the low running ammunition, the strategic advancements and tactics, strong and diverse zombies, and quick reactions have given a great time to many gamers in the community.

Turtle Rock Studios are now back with another game, Back 4 Blood, which will be available as a beta version from August 12th to August 16th of this year. What is yet known of the game before the beta release for testing, is based on the information available by the people who have visited the Turtle Rock Studios and seen the game in action there. The zombie shooter game offers us a player versus player as well as player versus environment gameplay, where you run, fight, get covered in dirt and blood, burn up things, and survive by doing whatever it takes, only to say in the end that, “Ah, this is just too tempting to let go of”.

For those who have zero clues as to what the zombie shooter game Back 4 Blood is about, they can go on YouTube and take a look at the Back 4 Blood Alpha preview video. For the sake of summing things up, I will help. The game is about you and your friends, a total of four in a team, who will find themselves in a zombie-infested environment to survive with guns and other lethal weapons at your disposal. The zombies will come in swarms so you will have to form a good strategy and play in teamwork to face off and come out alive.

The game gives one good feature for teamwork-based gaming. There is a system that allows you to set decks of cards that change the stats of players, kind of like assigning skill points. You can assign the stat cards according to what each team member’s performing role will be in the game. This way you can make teams, see how efficient the strategy is, and then make changes to the cards accordingly till you get the desired results. To explain it simply, one of the team members can be a medic, and so assigning a card that gives him healing stats would be helpful. The leading player can have the card that lets them mark zombies and make a call for other team members guiding them to different positions. A stat card can be given to a player which increases his bashing strength significantly using him or her as a berserker.

The safehouse in the zombie shooter game usually appears at the start of the game or after the team has gotten rid of all the zombies. In the safehouse, one can make changes to the deck cards or the stat cards. Players can see what all cards are currently activated in their deck and can even place new cards into their decks. This will be crucial or at least helpful as the game becomes more and more difficult over time.

Although as of now, you must be thinking that the cards are just to enhance the gamers’ level. However, that is not true, because the stat cards can be assigned to the zombies as well. Yes, you heard it right, you can make the game more interesting for yourself and create exciting challenges. These zombie-specific cards are known as The Ridden or the corrupting cards.

Adding such cards not only makes the game more challenging and fun. It also allows you to earn better rewards at the end of each mission, especially for finishing any additional challenges or missions, such as completing the mission within a fixed amount of time. Wiping out all the zombies, for example, really quickly, or managing to survive through the mission without causing any zombie horde to notice you can result in higher rewards.

There is a card for zombies that breaks havoc on the team. It calls for hordes of zombies one after the another after every two minutes or so. Such a challenging situation is one thing to imagine and a totally another thing to face. Not only will you have to kill as many enemies in the zombie shooter game, but also keep an eye out for the clock to see when the next hoard is about to come. As soon as the next one is about to come, players will have to find a position for a better defensive advantage to recover from the previous attack and bounce back in the battle.

There is another card that speeds up the rate at which the Snitches spawn or appear in the game. Snitches are really troublesome because they can summon hordes of zombies if they notice you, by making loud screams and noises. When encountering snitches, as the name suggests, the gamers will have to stay alert and collected. They will have to either pass undetected or get rid of them silently before getting into their notice.

Back 4 Blood has done a great job with these corruption cards by allowing players to create games that are not just unique, but creatively challenging, allowing for a more fun time. This way even if you get used to the basic gameplay, there is always something new for you to face.

Swarms and Player Versus Player

There is a Player versus Player Swarm mode in Back 4 Blood. It is a team versus team battle mode where teams of four each fight off against each other. This does give that Call of Duty type of vibe, but the only thing that makes it unique and more challenging is that one team will be made up of humans whereas the other team will consist of the zombie class called The Ridden. Each team will play once as humans and once as ridden in the two rounds.

The fights will not be too long, and within that short amount of time, the humans will have to tighten up their defense, and the zombie team, aka The Ridden, will attack hiding within the hordes of zombies controlled by the game's intelligence.

It is quite obvious, the ridden team has to defeat all the humans, and the humans have to fend off against the attack. Then the round change will switch the roles wherein the other team will now be humans the first human team will become zombies.

Each round of match commences with some time for the team to go out and get a hold of necessary supplies such as health kits, incendiary grenades, wires, and other explosives and weapons by scavenging the stuff lying around.

Nine diverse Ridden types are available in the zombie shooter game. The nine are divided into three major class zombies, with each class having three varying mutated zombies. If one rider is really good in a specific area, then he might be fragile in the other one. So according to the environment, the ridden will have to be chosen carefully. For example, Exploders do great when trying to wipe out a team that is hiding inside the house, because a closed area equals less space to run away from the explosion in time.

Well, with this we come to an end with a sneak peek of the game. There is a lot more to talk about, but I would suggest you all check out the beta version when it gets released or the Back 4 Blood Alpha Review in the meantime. Stay tuned to the Rock Turtle Studios to not miss out on any latest news about the upcoming zombie shooter game.

Back 4 Blood is Great for Streaming

The game will be a community favorite of the streamers. People already stream all sorts of games. You can be the earliest for this game, and start your streaming because a lot of people will be eagerly waiting to view the gameplays before buying the game. You can clear out their confusion.

Screen Record the game using the screen recording app, and then you can edit the video even on your phone or on a computer. Add a lit soundtrack, some of your fire comments for captions under the video, and upload it on your choice of the streaming platform.