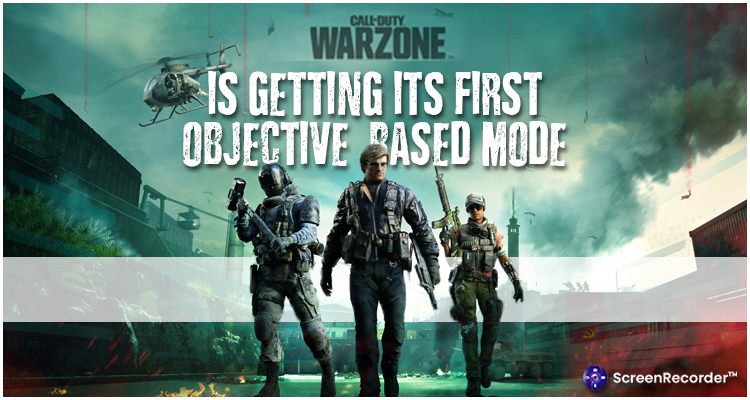 Call Of Duty: Warzone' Is Getting its First Objective-Based Mode

The class apart battle royale game, Warzone is a place where you either innovate and improvise to survive and win or you die. The free-to-play game, gamers can play and record the game through  Screen Recorder and show their play to others. Call of Duty Warzone is a staunch competitor to the other games in this genre such as Pubg. The game has been receiving continuous updates with new maps, weapons, improved gameplay, and more.

Activision has not lacked behind in providing a game where you and your friends band together and have a blast. Now Activision has offered another exciting feature in Call of Duty: Warzone- an objective-based mode known as ‘Payload’ in the game.

Call of Duty Warzone is a free-to-play game that presents huge maps where you go for a battle royal with your friends in separate teams. In the game, there are 150 players who play together as they drop down in parachutes into Verdansk. The map of Verdansk is a fictional place that was presented in the Call of Duty Modern Warfare. The map is huge and packed with stunning visuals, weapons, vehicles, many things that are destructible, and an amazing landscape.

The game was released last year in 2020, on 10th March at 8 AM PDT. When it was released, the game was accessible for all those who had Call of Duty: Modern Warfare. That gave those owners an edge over the others and extra time to start enjoying the game before the rest of the world does. The game was finally also released for everyone else in the world at 12 PM PDT for free.

There is no need to already have Modern Warfare to install and play the game. Anyone can download and play the game to their heart’s content as long as their system specifications match the minimum system requirements for the game.

What to Expect from Payload?

Payload will be added to the game by or on July 15, at 12 AM ET. In Payload the players will be divided into two groups of 20 each. The teams will be given charge of either to escort vehicles or attack vehicles. The vehicles are loaded with some parts for satellites and the teams attacking have to destroy it, and in that time the other team will have to defend the transport vehicle and vice versa.

The Payload mode has a time limit during each game within which the teams have to complete their mission. The players can create customized loadouts. The cherry on the top is that we have a new weapon from the Black Ops Cold War, Sentry Gun. You and your teammates can go ahead and customize the weapons according to your strategy and skills and get set to obtain the victory in the game.

This gameplay is quite similar to the destroy and save missions that we used to play in GTA Online by Rockstar and protect and demolish missions in the Red Dead Online as well. In them also you get to attack and destroy certain targets or protect them from the invading players. You fend off against attackers coming from above in parachutes, throwing bombs at you and their targets (Armoured Trucks).

"Can shift the balance of the war between Perseus and NATO.", says Activision about their latest Payload mode in Call of Duty: Warzone.

The update will be only somewhere between 8.9 Gigabytes to 9.2 gigabytes. The Payload update will be available on all the platforms such as PlayStation, Xbox, and PC.

Call of Duty Warzone has some minimum specification requirements for PC to play it. Even though anyone even below that requirement can still download it, only those with a system whose specifications meet the minimum requirements will only be able to play it to a playable extent. Needless to mention, a fast Internet connection is a must when playing an online multiplayer game, so get that Broadband connection if you have not already.

You need a Windows 7 65-bit or Windows 10 64-bit processor, which is a must for almost all of the new generation games for PC. You should already be having it, and if not, please get an update.

For Processors, you need an Intel® Core™ i3-4340 or AMD FX-6300 or equivalent. This is one of the low-end gaming CPU configurations that you can expect in a game in 2021, and it is low enough when compared to the kind of gameplay that you are about to get.

Graphics Card is a necessity to enjoy those stunning visuals or even have the game render properly. You will need an NVIDIA® GeForce® GTX 670 or AMD Radeon™ HD 7950 at the very least, or something equivalent. Also, you will need DirectX 12.0 which is again essential when it comes to gaming in 2021.

RAM requirement is 8GB. Have a DDR4 RAM at the very least with a mid to high-tier frequency for a smooth enough gameplay. The game requires an empty hard drive storage space of 175 GB, which is quite large. However, judging by the level and vastness of maps, the number of maps that you get, the graphics, the details in the game, and everything else justifies this storage requirement.

This is when we talk of minimum specs requirement that your PC must meet, and to be honest it is not a lot if we count out the storage part. Almost all of the games in the same genre and even in the other ones require somewhat similar if not a slightly higher system requirement to even play the game.

Coming down to what the actual specifications that your system should have in order to have the best experience when playing the game. No lags, best-in-class visuals, HD sound quality, seamless connection, minute detailing, fast rendering, and fast load time apart from an overall amazing experience.

You should have a Windows 10 64-bit latest update for the Operating System.

For the processor, you should have an Intel® Core™ i5-2500K or AMD Ryzen™ R5 1600X Processor. These processors are not one of the highest-end gaming processors, but in fact, mid-tier processors that are still very relevant, are quad core processors and are very fast.

With this, we come to an end discussing what the new objective-based mode, called Payload, is all about in Call of Duty Warzone. The game is a feast for the gamers, for the squad to bond together and the gamers to enhance and utilize their strategical minds and gaming skills.