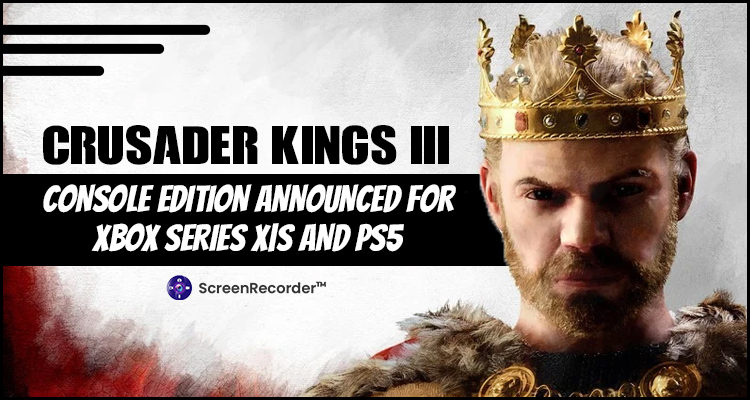 Crusader Kings III was released last year on September 1st for PC. The game was a success among the fans, and the console gamers were pretty anxious as they did not get the chance to enjoy the game. Well, there is good news for console gamers. Paradox Interactive, Sweden based video game company that is responsible for the publishing of Crusader Kings III has updated the fans gaming community about the launch of Crusader Kings III for Xbox and PlayStation consoles. The console version for the game is being developed with the help of another game developing studio called Lab42.

Paradox Interactive has said that their game Will be soon releasing for Xbox Series X and Series S as well as Sony’s PlayStation 5. The game will not be released for the previous generation Sony gaming console, the PlayStation 4, so many fans who use the older one should consider updating their console soon enough. More and more games in the future will be exclusive to the PlayStation 5, so updating can be a good choice as soon as possible.

There has been no specific information regarding the release date by the company, so there is an assumption that the game will release either in mid or late 2022 or early 2023 at the very least. However, at this point, we can only speculate. Stay tuned to the respective sites and social media accounts for any updates.

What We Know About Crusaders III

Crusader 3 or Crusader Kings III is a famous strategy-based game where the players have to create strategies from the very beginning to face the hurdles, where each decision counts and can have an impact on how the outcome of the game comes out for the gamer. The game is the third addition to the Crusader franchise that has been there for more than two decades now. The game demands you to create the fate for the royal family that is under your charge.

Inside the game, players are given the option to select between a noble lineage or a royal lineage and also choose a real out of a number of realms available on the map. From the royal court of the  Rajput rulers in India to the rulers of Iceland, from the Japanese Shogun family in Japan to the Royal Family in England, a lot is available to select from.

Through your decisions and strategy, you decide the fate of the dynasty you choose for yourself. The royal court is in your control, and strategizes the security of the ruling areas, the political strength as well as the military strength. Keep earning new titles for yourself as the boundaries of your empire increases, and create a name for yourself that shall be passed down through generations to come.

In the game, there is so much to do. You can be a ruler devoted to God and have a religious royal play in the royal court, and have the clergy at your side as well as the religious masses. If not this, then the gamers can even create their unique religion and instill a unique faith in the public or face unending wrath of the offended masses.

There are Knights in the game that you use, there will be revolts by the peasantry in the empire that the gamers will have to face and resolve by whatever means they deem fit, there will be pilgrimages and attacks from foreign tribes and kingdoms, Vikings and such. There is drama in the game and so is a thrill, an adventure, and a whole stretch of land during the Middle Ages to explore.

The players get to select one of the five lives that are very different from each other. Based on the one you choose, there will be opportunities available in the future as you advance through the game, to improve your skills and abilities. There is merit to stay true to your chosen character’s innate personality and nature, and there can be some bad consequences for going against it.

Make sure to select only someone worthy as a protector to your heirs, and give those guardians training to face any and all enemies. However, what if the heir that you were relying upon does not live up to the mark? There will be many such problems that you will have to face, and decide the next move.

A character that has an aggressive nature and is violent often, can have a fearsome image among the masses in the kingdom. Whereas, a kind king might get a lot of love from the masses but can be prone to some betrayals as well, so watch out for them.

Battles, Wars, and Other Things

There will be wars, and you will need an army that can support your ambition. Train the knights to arm the soldiers and stock up the supplies. Fun the research and developments related to military strength and the welfare of the subjects. Facing enemies that you think your army cannot face? Pay some mercenaries and get them to do the job.

Want to get intel from neighboring countries? Your spymaster can get that for you. Hire other spies and assassins to get rid of enemies under the radar. Do you think you do not want to wage wars to widen your kingdom’s boundaries? Go for matrimonial alliances. These things are just the surface of what all can be done in the game.

Crusader Kings III is a game that will give the gamers an experience that they will not forget easily. Therefore, what better way is there to remember some of those amazing moments than to save them in the form of a video. Well, that can be easily done using a screen recorder.

Screen recording is the recording of everything that is happening on your screen in the form of a video file that can be edited and viewed later. The resolution of the video file can be set as per the user’s choice, and there is also an option to save the audio as well.

The precious moments in the game should not be missed out from saving them. Screen Record and share them with friends, family, and acquaintances. You can edit the screen recordings and stream them on YouTube or Twitch. Gamers nowadays are involved a lot in streaming their games, and the streaming community is growing large at a rapid pace.

Screen Recorder: Its Other Uses

Then you can also save most of the videos that you watch online. Now there is no more a need to save links of your favourite videos, or bookmark them. Using the screen recorder, one can simply save those videos in a separate folder and have easy access to them even without an internet connection later.