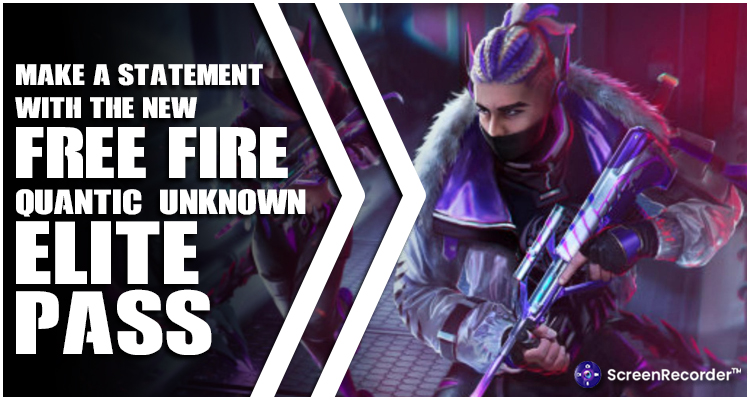 The thrilling free-to-play battle royal game, that has been one of the trendiest in its category for the past few years, Garena Free Fire is now back with the latest Elite Pass in its Season 40. The Elite Pass is called the Quantic Unknown this time and has a whole new array of weapons, characters, skins, and other items in it.

Free Fire is a game by the Garena studio and is one the best free-to-play mobile games in the battle royale genre. It competes with games such as Pubg and COD. The game was launched in 2017 and has slowly gained its fame in the market. Especially during the ban of Pubg in India, the game saw a massive surge in the number of users. That is due to the huge gaming population in India that loves battle royales.

Free Fire offers customizable characters, weapon skins, and multiple maps for players to choose from. The game is an open-world game, wherein you can go solo or with a team of four and fight against other teams or solo players. The game is packed with thrill and action, from Large Machine Guns to Shotguns, there is everything for everyone to match their playing style and enjoy the game. The game is available on both iOS and Android devices, and PC as well. You can download it from the Apple Store or the Google Play Store.

There are in-app purchases in the game as you can buy several paid items that add to your style and skills. There are customization items for characters and weapons that can be bought using real money to make the gaming experience awesome. However, when it comes to playing, surviving, and killing, it is all about the skills and strategies which cannot be bought in the game but only be learned through experience.

Just like all the other previous Elite Passes in Garena Free Fire, The Quantic Unknown also presents to you several fresh looks in the game, and by the looks of it, we are surely going to love a lot of them.

There is a male package that goes under the title of Venomous Skorpios, and the female one is known as the Valian Skorpina. The titles are quite obvious with the genders. The two costumes are inspired by street fashion and look very edgy as well as unique.

Then we come down to the goodies that come with the Elite Pass. The goodies give the players nice additions to their character’s looks and weapons. From a backpack to sunglasses, a new Jeep or a vehicle skin, or a stuffed toy, there can be anything and many things in the goodies.

Cost of The Elite Pass

The Elite Pass is paid, that is, you have to pay with real money for it normally if one does not know it yet. Season 40’s Quantic Unknown is priced at 499 diamonds in the game. When you buy the pass, you get several elite challenges and rewards for finishing them, as well as daily challenges and rewards. The limit for daily gold is also increased by 100.

There is also an option to buy an Elite Bundle which includes all the things that the Elite Pass offers plus more. It gives an extra 50 additional badges as well as several instant rewards that are given the moment you buy the Elite Pass. The Elite Bundle is priced at 999 diamonds.

The first thing that you get in the Elite Pass Bundle is the Jeep Quantic Unknown that is a purple-colored jeep with cool graphic designs on it. Then there is an AUG gun of the same theme as well as a cool-looking jacket and T-shirt. The Valiant Skorpina bundle that you get at 50 badges is one of the best things in the bundle and you cannot get it with just the plain Elite Pass. The Venomous Skorpios Bundle is rewarded at 225 badges in the Elite Bundle.  There are many more things for you to find out, so go ahead and get that Quantic Unknown.

How To Buy The Free Fire Elite Pass

The first Step is to click on the Elite Pass Icon on the screen in the Lobby inside the game. Then a new screen will open.

The second step is to click on the upgrade button, the golden-colored one.

The fourth and last step is to confirm the purchase when a dialog box pops up on the screen asking for confirmation. As soon as you click on the golden confirmation button, the diamonds are transacted from the account and the Elite Pass is awarded.

Free Fire is a game that is streamed and viewed by millions of people worldwide. If you also want to be one of the streamers or just want to give it a try, then the first step would be to save the gameplay. The best way to save gameplay is Screen Recording.

Screen Recording is, as the name suggests, the recording of all that happens on the screen of the digital device, such as a PC or smartphone, and saving it in the form of a video file on the device itself.

You can save that amazing kill that you made or the 1 vs 4 clutches in the game. The fun memories with the friends in the game can be recorded and so can be the conversations. The recording can then be edited and uploaded on the preferred streaming platforms such as YouTube or Twitch, or just be shared with friends and family members.

For Streamers who live Stream Garena Free Fire or any other game, the Screen Recording option is a necessary thing to have. As a live streamer, you must have often wished to save the streams and then upload them later on YouTube or other platforms.