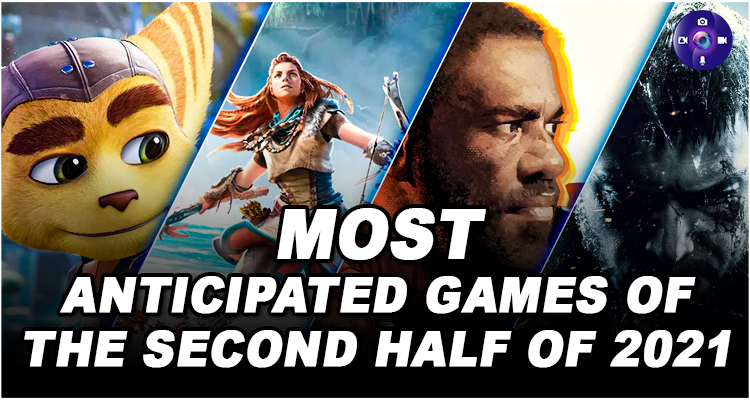 Most Anticipated Games Of The Second Half Of 2021

We are already midway through 2021, and the hype for the anticipated and upcoming games for Pc and consoles is just increasing. The gaming industry did not receive that big of a setback as other industries in 2020 due to the ongoing pandemic. There are some really amazing games that are anticipated to release before the end of 2021, that is, by December 2021. These games are for sure about to hit some benchmarks, make some new records, and most of all give you gamers one hell of a time. Jumping down to the list, for the games on PS4, PC, PS5, and Xbox, here are the games.

One of the most favorite First-Person Shooter video games, set in a science fiction military world, the Halo franchise is back yet again with another game for its Xbox series X and series S consoles.  It will be a sequel to the storyline of our favorite classic character Master Chief.

The game has been developed by the same studio as for the previous games from the franchise, that is the studio 343 Industries. The game from the legendary Halo series will be available by December 2021. That means the time for the eager gamers to grab the glory is about to come soon enough. Soon you will go on a journey to save the galaxy as Master Chief, although there is not much information released by the developers yet, we are expecting them to release some data soon enough, so stay tuned.

Kena is a third-person action-adventure game that is sure to take you on an unforgettable journey. The game will make you remember the journey for such a beautiful game. The setting of the game, the stunning visuals, and the graphics of the game make it stand out from its competition. The game has a serene landscape that mesmerizes you with its beauty, the blue lakes that look heavenly, the greenery that is saintly, the ice that is horrifying as well as beautiful are just one aspect of the game. The storyline is another thing that we are looking for in the game.

You are a guide for spirits in the game, and the darkness is giving a threat to your beloved jungle, you must do everything to stop the coming darkness, getting assistance from the black blobs that stay by your side. The game tests Kena, that is you, in her skills related to combat and leadership. The game has been given a release date of August 24th this year for now.

The video game has been in development for so long, that it became part of the memes that made fun of such games that never came out but only their news did. However, Psychonauts finally has been given a release date and we expect it to release on the date or anytime near. The game has been said by the developer to be released on August 25th, 2021.

At long last, after so many years of waiting, the gamers can finally meet Raz and play the game, which means we will be able to go on new confusing and challenging missions, sort out puzzling messes and move in the story. New powers to use, new skills to master, the game will definitely be worth the wait. It will be available on PS4, PS5, and Xbox

If you liked previous “Life is Strange” games, such as Life is Strange: Before The Storm, then this one is something you should look out for. With the new characters, new relationships, and new meanings to discover in their life, the game will be adored by the players for sure. The upcoming PS4 game will be available for PC and PS5 as well as Xbox.

The game that is one of the most-awaited and anticipated games of the year, Deathloop is a multiplayer first-person assassination game. However, what makes it most unique and amazing is its adventure that is bound by a time-loop in a cool-looking world, where everyone on the island where the game is set is a part of the time loop.

Well, this is not it, you can even play as the rival assassin, Julianna, and work on stopping Colt from stopping the time-loop. The Deja-vu will surely get you and so will the brilliant and unique gameplay. The release date for the game has been given as

Tom Clancy’s Rainbow Six Siege and Ghost Reckon were more than we anticipated and now Ubisoft Montreal is back again with the new addition as Six Extraction. The game only keeps on getting even better, the graphics, the storyline, the characters, the missions, the difficulty, weapons, maps, and more. The new engine on which they have developed that game has given us a game that is just so worth the wait.

There is a lot to experience in the game, where you can not only play players vs players but also Players vs Environment combined in one. You and your rivals fight against each other and all sorts of enemies. The game is set to release on September 16th.

The 1996 game, Diablo is one blast of a game that can definitely be one of the games that a gamer should play at least once. The game is still relevant and fun to play. There are fans who have always wanted but never expected that they will actually get a sequel to it after more than twenty years. Well, the unbelievable news is now true, Diablo 2: Resurrected is coming to your consoles and PC.

The game will surely bring back some memories and give back a hundred more. Play with your friends, the most anticipated video game of the year. The Hell you have to go back to again is just as hellishly adventurous as ever. The old protagonist is now dead, so you are the new hero. The game will release on September 23rd as of the latest relevant information.

The Yakuza video game series is back with a spinoff of a sort named Judgement. The game, like Sleeping Dogs and Yakuza, has martial arts that are top class, the underworld connection, and a storyline that is full of thrill, discovery, adventure, and suspense.

You play the character of an ex-lawyer turned detective who has a sharp sense of observation and solves the crimes using his skills, finding himself in some messy and tight situations and ugly revelations of the society.

After the success of Death Stranding, a newer release for the game has been announced which will essentially be the same gameplay but with a newer story in the new missions, weapons, and accessories that were previously not there, new skills for combat, and an extended take on our hero, Sam Porter’s, objective.

You get a Buddy Bot that not just transports legs or can attack scavengers by kicking them but also has a cannon. The cannon can shoot the stuff it is carrying to places with a tremendous amount of force. Well, the game will be releasing on September 24th, and you should go watch the trailer to understand just what the hype is all about.

The action-packed, adventurous, first-person shooter action survival game has become a fan favorite of millions of people since its first edition in the franchise came out. Far Cry is back again. Ubisoft will be releasing Far Cry 6, another addition to the open-world franchise. Here you take on a new villain with hundreds of people under his control who will try to kill you in, coming at you on foot, in bikes, in cars, tanks, and helicopters, and throwing grenades, rockets and so much more.

Get ready to go out on a new adventure on October 7, which is the anticipated release date for the game, to skin animals, craft medicines, take out bullets from the body and kill your enemies.

With these we come to an end to this list, but that does not mean this is it. There are many top games that are anticipated to release this year in the second half of 2021. Some of them are:

Marvel's Guardians of the Galaxy