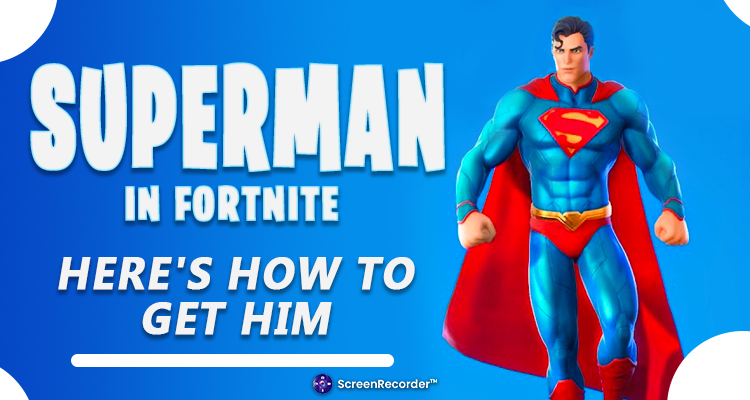 Superman's In Fortnite, Here's How To Get Him

The greatest, the strongest and the kindest superhero in not just the DC verse but also the comic verse, Superman is now a part of Fortnite. The Man of Steel’s skin is available for the gamers to try out now on the free-to-play battle royal game. The DC fans who have been playing the game had to wait for a whole seven seasons of the game before finally getting their wish come true. This new addition in the game is going to not just blow everyone’s mind away, but also add extra stars to the game itself after its recent Ariana Grande’s concert.

However, unlike how you used to get the previously launched new skins, the Superman skin, being so special, is not so easy to get hold of. There are several challenges that the players will have to complete in order to get a chance to get the Karl El skin.

There is good news though. The challenges are not going to be difficult or something that is unachievable. Instead, they are going to be fairly modest or simple enough to understand and complete. So, everyone stands a chance to get their flying beast’s skin. The blue suit with the red cape and the classic Superman logo on the chest is all we need to feel accomplished. Well, there is still more to unlock, as there is also a black superman suit available.

Yes, you heard it right! Not just the classic blue suit, the bold and intense black superman suit is also available for the fans to try out. The black suit has been in much hype ever since it was teased in the DC verse, and finally shown in the recent Snyder Cut. Now is your chance to grab it and go fight the enemies. This black superman skin makes the total number of skins as three that are available for download.

The challenges are laid out all across the map and the gamers will have to reach them and finish them. Completing them brings back the lost memories of Clark Kent, aka Superman, which will eventually remind him of his identity of Superman and then you will get to see the classic Superman transformation wherein superman enters a phonebooth in his daily attire, rips off the shirt from the chest area to reveal the Superman logo and then flies out of it in his Superman look.

The Challenges to Get The Superman Skin

The several quests that you will have to complete have been listed below along with what reward you get for finishing each challenge. Initially the quests will be related to Non-Playable-Characters and are pretty simple to complete. They require you to find or search for these characters and talk to them about certain stuff. In your conversations, the NPCs will provide some challenges that the players will have to complete or go on a quest for them.

On finishing the first mission or the quest, you get the “Call to Action” Empticon. On completing a total of three quests you get a shield spray, and that too not just any ordinary one, but Superman Spray. When you finish 5 challenges, you finally get the Clark Kent Outfit. Well, these quests are named as “Clark Kent, Armoured Batman, or Beast Boy” Quests. After these, the players will move on to the next set of challenges.

The first one is to glide through some rings dressed as Clark Kent. After that, you finally have to visit a phone booth and there you will transform into Superman.

Getting The Black Superman Skin

The Shadow Superman or Black Superman Skin is just simply intense and dark looking. Black is a favorite for many people, and many heroes or anti-heroes who have worn black have been fan favorites for decades now. Black Spiderman, Venom, Black Adam, and Black Superman are just some examples.

In order to get your hands on this epic suit, the players will have to finish some epic quests as well. Fortnite does not make everything easy, if you wish to have something amazing, you need to earn it as well to rightfully deserve it. Complete as many epic quests as you can to get additional rewards.

The Shadow Superman Costume in its full setup looks awesome. The logo is metallic grey in the center, the eyes are all white and omniscient looking, and the cape is all black too. The slight matte finish makes the thing look cool. This suit is for those who love the black color above all, and who want something that not everyone has.

The suits are the main attraction that is for sure. However, there are some extra things that you can earn as well as finishing the quests. The first additional reward is the Daily Globe Back Bling. The other back clings are Superman’s red cape and the Superman’s symbol on his chest that is sprayed on the back. The last thing that you can get is a “suit up” emoticon using which the players can transform their Clark Kent character into the super-strong Superman Character.

Armoured Batman is the hot stuff. It looks cold, intensely built, sturdy, and made to kill. Once a player suits up in it and faces someone in Superman Skin, they are bound to ask “Tell me, do you bleed?”. DC fans have been as crazy about it as the Marvel fans have been about the Iron Man’s HulkBuster suit.

Therefore, Fortnite is back yet again with new surprises for the gamers, never failing to entertain us. The DC fans are going to be especially pleased with the addition of the new armored Batman and The Superman Skins.

Why You Should Screen Record Fortnite

Fortnite is a game loved by millions of people around the globe. Those who play love it but those who do not enjoy watching the entertaining gameplays as well that are streamed on various platforms. Fortnite is streamed usually on Twitch and YouTube and is one of the most-streamed games online.

In order to stream your gameplay, to show that Superman skin that you just unlocked, you will need to record the gameplay. This is where screen recording comes in. Using the Screen Recording application, the players can record their entire gameplay from start to end and even more. The Screen Recording app allows you to record almost all the things that are happening on your screen. After that, you can just make some changes to the video that has been recorded and add some final touches before streaming the video online. However, Live Streamers will have to live stream Fortnite using other methods.

What is Screen Recording

Screen Recording is as the name suggests. When you screen record, everything that is happening on your device’s screen from scrolling to video playing and swiping, and everything else gets recorded. It gets stored in the form of a video file. There are options to include audio as well and to set the resolution of the video that is recorded. This way one can have just what they want, and save up some storage space as well by having lower quality videos if they please.