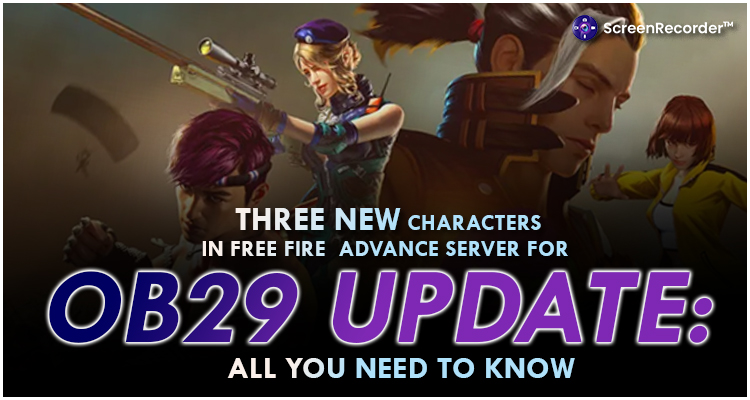 Three New Characters In Free Fire Advance Server For OB29 Update: All You Need To Know

One of the hottest android games in the free-to-play battle royale genre, Free Fire by Garena has become a leading game now. Especially since the ban of Pubg mobile in India, the game saw a huge surge in players from India. Globally as well, the game has seen a steady increase in the number of players and growing popularity. The game launched around four years back, and now is on a pedestal much higher than of its contemporaries. Free Fire’s fourth anniversary is right around the corner, and we can expect some exciting deals, coupons, and updates.

The characters that Garena has introduced already and keep introducing from time to time are one of the best things about Free Fire. The characters are just lit, fire, and appeal to not just the casual gamers but pro gamers well. That is especially because of some amazing characters from other classic games, especially with the trending collaboration with Street Fighter.

The game developers not only create and bring to us new characters but also send new updates to the older ones as well. It is not like they just simply discard or forget the older ones, and that just goes to show how dedicated and considerate they are about their game and the users.

The usual way that this works is that first the developers create and customize or update a character, then they add those new characters or updates to an Advance Server. The server is then sometimes released for the general public to access and thus they can access the characters before an official update. This way people can experience the upcoming update before the official update, and also give their precious feedback to the developers for any modifications if necessary.

The latest Garena Free Fire ob29 update Advance Server is said to have some really amazing and unique features coming with the update. There are three upcoming mysterious characters or as the game calls it ‘Mystery Characters’ along with other modifications and updates and more. The gossip around the town is that one of the mystery characters is Moco in his awakened form.

Moco is one of the most famous characters in Garena Free Fire. She is charming, cunning and beautiful, with a peculiar sense of fashion. Her innate ability is related to hacking with a “Hacker’s Eye” that she has. Using that power, she can tag an enemy player which she has shot for around two seconds. In that time, she and her teammates can see that enemy player behind any obstacles or hindrances, and track the enemy for a better strategic advantage. If the player is at her maximum level, she can tag the enemy player for a whole five-second, which is a lot.

The first Mystery Character comes with an ability or power called ‘Engima’s Eye’. It is a passive skill as per the information provided inside the game. This character is by far the one that is rumoured to be the awakened or higher version of Moco as her skill resembles Moco’s “Hacker’s Eye”.

This character can mark enemies that it shoots or hits for some moments, and if the enemies move, then the tag remains for a slightly longer time. However, the duration of the marking is capped at 2 seconds initially at her base level.

The second mystery character on the list is the one with power or ability known as ‘Vital Vibes’. This special skill is really beneficial with the rescue operations of a teammate, as it enhances the speed of saving a teammate by five percent (5%). This will definitely come in handy when forming strategies because each second counts when the battle is on.

The other perk that this character comes with is that it gets +15 health each and every time after performing each rescue operation. This is beneficial to both the player being saved as well as the person helping during, especially when under a direct attack.

The third character from the list is a healer of some sort, as he has a skill called “Healing Heartbeat” as per the game. This is similar to an ability we see in Valorant’s character Skye.

By using this skill, the character creates a recovery area, or let us call it a healing area, wherein anyone who is present will recover from their injuries. The zone or the area, circular in shape, is 5m in diameter as per the game’s ratio scale. The players heal, getting +3HP every second of staying in the zone. The Zone also has a time limit of 10 seconds, after which it disappears. It can be upgraded to a maximum of 85 seconds, which is a huge deal as it can restore the full health of many players as well as keep healing during a fight simultaneously.

If you think that this is it, then you are wrong. This third character’s zone also allows for the players who are downed after an attack and need recovery to be able to stand back up without any other teammate helping them. In the zone, they do self-recovery from the downed stage as well.

The redeem codes are advantageous as they let you get some of the paid rewards, skins and guns, and characters, and such for free. These codes come and go, get outdated, so grab them as soon as you can or keep an eye out for the new ones. As for the list below, these codes have been updated just recently.

The first step is to the website for Free Fire redeem code. Then log in with your credentials for the Garena Free Fire account. Then there you can simply do the rest and redeem the codes. Once done, a message for confirmation of the redeeming of code appears on the screen. The codes are also region-specific so some of them might not work. You can always find more codes on the internet, and the specific ones that work for you. These codes are one of the easiest ways to get Free Fire Diamonds at no cost.

Nowadays, streaming and uploading your streams or matches is really trending. People have made a career out of it, and why not? It is a fun job and an interesting one too.

Well, you can also do the same, starting by recording your games. There are inbuilt screen recorder apps in many devices, whereas in some a third-party app can do just the same.

If you play Free Fire on a PC using an emulator or something, then you can try Screen Recording the game using some third-party app and get a high-resolution result with better fps. This is just an option, as you can also use OBS Studio and Twitch to stream your game directly to some live streaming platforms. You can also screen record those streams where you play and your reactions and upload them to different platforms.