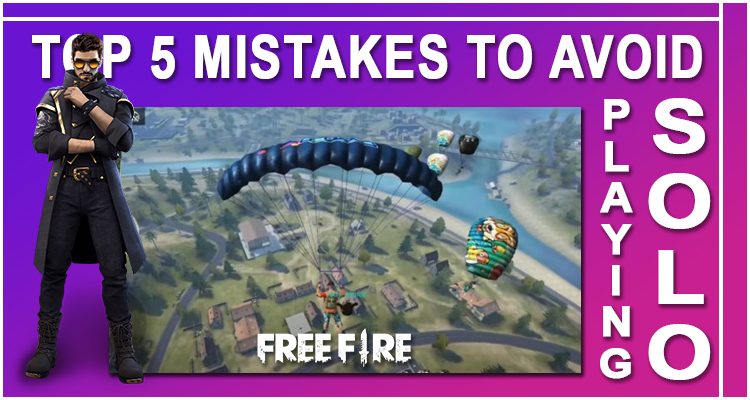 Garena Free Fire is one of the hottest free-to-play battle royale games. Millions of people play it on their mobile phones and spend hours with their friends or solo in the game. Having a team or a duo to play the game is undoubtedly fun, however, one can play alone and still have a lot of fun in Garena Free Fire. Although playing solo and learning things in the game naturally is exciting and fun, there are some things that a player can know beforehand to have a better gaming experience. There are several things that solo gamers do wrong that are stopping them from having the best experience out of the game. Therefore, here are the top five things that people do wrong or mistakes that gamers make in the game which you should abstain from when playing solo.

Do Not land on a Hot-Drop Area

Hot-Drop Areas or Hot Zones are the locations in the game where many players, more than four or five teams, land. Such areas become an instant zone for action and intense battles. They demand quick reaction, searches for weapons, and alertness to look out for enemies to take them out before they take you out. With so many teams around, you have to defend as well as attack, and by the end of the whole intense fight in the hot-drop area, only a handful of players survive.

Such areas are great for a thrilling battle and are best suited for squads. For solo players, such areas can be a summon for death. 4 vs 1 is itself a difficult feast, and having multiple squads, meaning 8 or 10 vs 1, can make the likelihood of survival very less for the solo player.

This is why it is better to not land in such areas. A single player should instead drop at locations that are little secluded where the least amount of people or no one at all lands. This way they can get decent loot without having the rush and can survive for long enough. Once the solo player has a decent loot, by that time many squads will have lesser members remaining alive, the chances for winning against those squads go higher for solo players against them.

Do Not Reveal Your Position

Playing solo comes with the advantage of stealth kills. Solo players can move about more stealthily and can attack a team by surprise, taking them down, or as many players down as possible, in one go. Being solo means not having to decide things according to multiple people. Making plans for a single player is faster and more effective if executed properly. Solo players can lay low and survive till the very end and have a higher chance of winning the game.

However, many people do not like playing stealthily, but instead, want to have fought and shoot other players in the game. Even then, some amount of stealth is necessary to have an equal footing against the team players in Garena Free Fire. Solo players can avoid shooting at other teams which are at a distance, or if the solo player does not know the locations of the team members of the opponent team. That is because once your position is revealed, the opponent team can surround you and attack. Also at a distance, it is possible to take out one or two members but that does not always happen.

It would be better to attack only when there is a certainty that you can defeat them, or if they are close enough for you to take out their players easily. Till then try not to reveal where you are.

Playing solo means that your position during a fight can be surrounded from multiple sides, once revealed, by an opponent team in Garena Free Fire. The moment you shoot them or they spot and come after you, your current position is jeopardized. In such moments, it is wise not to stick to the same location where you were spotted at. Even the sound of your gunfire from that location can lure in many blood-thirsty squads.

To avoid such a scenario, or at least to avoid getting cornered, try changing your position once it has been revealed. Do not stay at the same location, but instead find out safe passages to move around and rotate. The farther you get from the initial position unnoticed, the better advantage you will have over the opponent team, especially if they are en route towards your initially revealed location. You, as a solo player, can then attack them with an element of surprise and take them all down.

Do Not Fight When Your Health is Critical or Low

Fighting when your health bar is low is undoubtedly not a smart move. Even in teams, unless you are in a do-or-die situation, that is, you are under fire and are not getting enough time to heal, going into a new battle without proper health is like a suicide mission in Gareena Free Fire.

As solo players, such a feat must be avoided as much as possible, unless there is no other choice. Instead, look for health kits or other health recovery things in the game and improve your health status. It would be better to have a full health bar. Once you have done that, feel free to engage in a new battle as soon as possible.

Do Not Experiment with Weapons

Playing solo is the worst time to be experimenting with new weapons. You might like to try out a gun that you have not tried before but you should do that either in the practice area or when you have enough members to back you up in case the experiment goes wrong. Unless you are a new player in Garena Free Fire, knowing what weapon suits your playing style is necessary knowledge. It takes time and many matches to understand it, and once you do, try to stick to those weapons when playing solo. Proficiency and accuracy will play a key role in winning the matches in such cases.

When you are proficient with a weapon, you get used to the recoil of the gun, how much lower to aim while shooting, the reload time, and weapon switching. Using a random gun can be done only when there is no other choice.

Now that you know what things to abstain from when playing Garena Free Fire solo, you can screen record your solo gameplay and share it with your friends. Solo gameplays are of the most intense, as you fight against squads of 4 or 2. Moving about secretly, attacking others by surprise, collecting items, and surviving till the end, the gameplay becomes just too interesting. Such gameplay should be shared with your friends, and what better way to screen record the whole game.

You can even stream the screen recording of the Garena Free Fire on YouTube or Twitch on your account there (you can create one if you do not have one already).  Use the screen recorder application on your mobile. The video can then even be edited, a soundtrack can be added, to make it appealing.

Screen Recording is the conversion of the visual content on your screen into a video, frame by frame. Everything that you see on your phone live, is converted into images that are stacked together to form videos, similar to how a video camera records. Unless the content is restricted, due to some piracy policy or privacy policy, the Screen Recorder application can record almost all the things that you see on your phone screen, even with the audio (optional).

Nowadays phones have in-built screen recording features, however, not all devices have it. That is why there are several third-party apps that are available for download online. There was once a time when the task was so difficult that people had to hire professionals or use expensive software to record a computer screen. However, with the advancements in software technology, now this task is a minimal one that can be done by just about anyone who has a smartphone or a computer. So, do not think much and get a screen recorder for yourself.